Lansford is a borough in Carbon County, Pennsylvania

Lansford grew with the development of local anthracite coal mines, and was named after Asa Lansford Foster, who was an advocate for merging the small "patch towns" that developed in the area surrounding the anthracite coal mines. The population was 3,941 at the 2010 Census, a steep decline from a high of 9,632 at the 1930 census common to many mining towns in northeastern Pennsylvania. 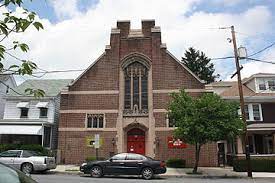 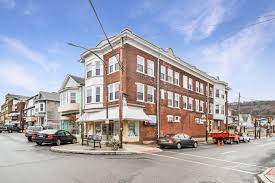 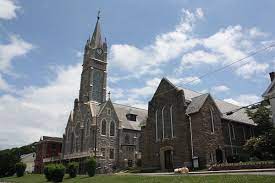 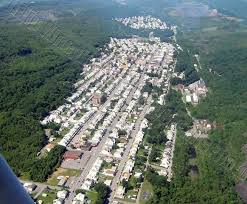 Lansford is a county-border borough (town) in Carbon County, Pennsylvania, United States, located 37 miles (60 km) northwest of Allentown and 19 miles south of Hazleton in the Panther Creek Valley about 72 miles (116 km) from Greater Philadelphia[a] and abutting the cross-county sister-city of Coaldale in Schuylkill County. The whole valley was owned and subdivided into separate lots by the historically important Lehigh Coal & Navigation Company (locally called "the Old Company") which likely settled some structures on the lands by 1827.[b]

Lansford grew with the development of local anthracite coal mines, and was named after Asa Lansford Foster, who was an advocate for merging the small "patch towns" that developed in the area surrounding the anthracite coal mines. The population was 3,941 at the 2010 Census, a steep decline from a high of 9,632 at the 1930 census common to many mining towns in northeastern Pennsylvania.

The old No. 9 Mine and Museum in Lansford, a deep mine which operated from 1855 to 1972, is now open as a tourist attraction offering tours of the mine and a wealth of information on local mining history. A museum occupying the mine's former Wash Shanty building on the site displays a large collection of mining artifacts.

One of the local mine bosses, John P. Jones, was murdered in Lansford, reportedly in connection with labor union strife, attributed to members of a secret society known as the Molly Maguires, many of whom were put on trial and hanged in Carbon and Schuylkill Counties during the mid- to late 1870s.

Lansford was the home of the first Commercial Cable Television system in the United States.

The Lansford Historic District was added to the National Register of Historic Places in 2012.

Geography
According to the United States Census Bureau, the borough has a total area of 1.6 square miles (4.1 km2), all of it land. The town shares the border of Carbon and Schuylkill County with the abutting neighboring community of Coaldale, which is de facto, a suburban bedroom neighborhood. Lansford is 1 mile north of Summit Hill (where the first anthracite deposits mined by the Lehigh Coal Company were discovered in the 1780s); 10 miles west of Lehighton, and 6 miles northeast of Tamaqua. Lansford's elevation is 1145 feet above sea level. It is also 27 miles northwest of Allentown and 9 miles south of Hazleton. It is located on the northwestern fringe of the Lehigh Valley and is at the southern end of the Coal Region and the Pocono Mountains.

Lansford sits on the north slope of Pisgah Mountain above and along the south bank of the Panther Creek tributary of the Little Schuylkill River, athwart US-209 west of Jim Thorpe, Nesquehoning, and the eastern extent of the Lehigh-Schuylkill drainage divide, down slope and below historic Summit Hill and east of abutting Coaldale and Tamaqua, Pennsylvania, both farther downstream and west. Nesquehoning Mountain dominates the north bank across the Panther Creek and the rich coal mines of the valley shipped coal through the 3,800 feet (1,158.2 m) long Hauto Tunnel of the Central Railroad of New Jersey (CNJ) competing for the rich trade with New York City and Philadelphia.